Humans have always had a need for light. Our evolution hasn’t provide for night vision. Yet. As of this publication, humans still rely on shiny contraptions that project light. Thankfully, our large brains have provided a solution in the form of flashlights.

They come battery powered or with a crank. I keep both on hand, but prefer battery. They provide the most light and are there with just a push of a button. The cranks are great to put in your bugout bag or in your vehicle in case the lights truly go out for an extended period of time, but I don’t rely on them all the time.

A flashlight can be one of the most important survival items you can keep on hand. I’m sure we’ve all experienced loss of electricity and the first thing you do is destroy the house looking for the family flashlight only to find out the batteries are dead! This is why I always suggest keeping multiple, high quality tactical flashlights all over the place and let every member of the household know where they are. In fact, keep one that you only use for lights-out situations.

This list will give you information on choosing tactical flashlights. These are tougher than what you will normally find in stores. Not saying those won’t work when you need a light, but you’re probably like me and want something durable, will always work and can be used in a self-defense situation.

You’ll likely see the word lumen when choosing a tactical flashlight. This is just a measure of how much light the flashlight will emit. The more lumens, the bright and more powerful the light will be.

Flashlights are one of the top items that should go in your EDC (Every Day Carry) kit. It should be right up there with a pocket knife or neck knife as far as importance. I can’t tell you how many times I’ve needed a flashlight and didn’t have one.

This pocket-sized tactical flashlight uses a super high efficiency LED to produce either 15 or 500 lumens of focused and powerful light. It has a click-type tail cap switch that allows the user quick access without fumbling around for the switch. The body of the Surefire Fury tactical flashlight is made from aerospace aluminum and is anodized to military specifications. This makes it tougher than your average flashlight and resistant to cracks, corrosion and dents. You can run it a long time on the battery; the 500-lumen high setting will give you 1.5 hours of light and the lower setting at 15-lumens will run for a whopping 46 hours! That’s plenty of time to get where you need to go. This flashlight is fairly small too. It easily fits in your hand or pocket coming in at 5.4 inches with a 1.4 inch bezel diameter. It only weighs 5.7 ounces with batteries installed. One reason this tactical flashlight is rated so high is it’s powerful, tough, long lasting and easy to carry. Only issue is the price. It’s on the higher end of tactical flashlights, but you pay for quality.

The ProTac brand was created for trade professionals and law enforcement. It’s a small, but powerful light and offers 3 different programs which consist of high/strobe/low (factory default), high only and low/high. It has a push button tactical tail switch which we always recommend on tactical flashlights. You can easily work it with one hand while your other is on your weapon. You would have a hard time wearing this beast out as it has a 50,000 hour lifetime. It projects 850 lumens. Remember, lumens is how powerful the light is. This entry is a more cost efficient option.

This is one of the more powerful tactical flashlights on the market! 1000 lumens with 6 different output modes for user flexibility. 5 regular settings plus strobe to give you options. Just like all others on this list, it’s tough and made to take a beating and continue working. They make this tactical flashlight out of durable aircraft-grade aluminum. It weighs only 3.1 ounces and can run a total of 140 hours on the lowest output setting and 1 hour and 10 minutes on the highest output setting. It would be a rare occasion that you would need to run a tactical flashlight that long, but if you need more, I would always suggest carrying extra batteries. 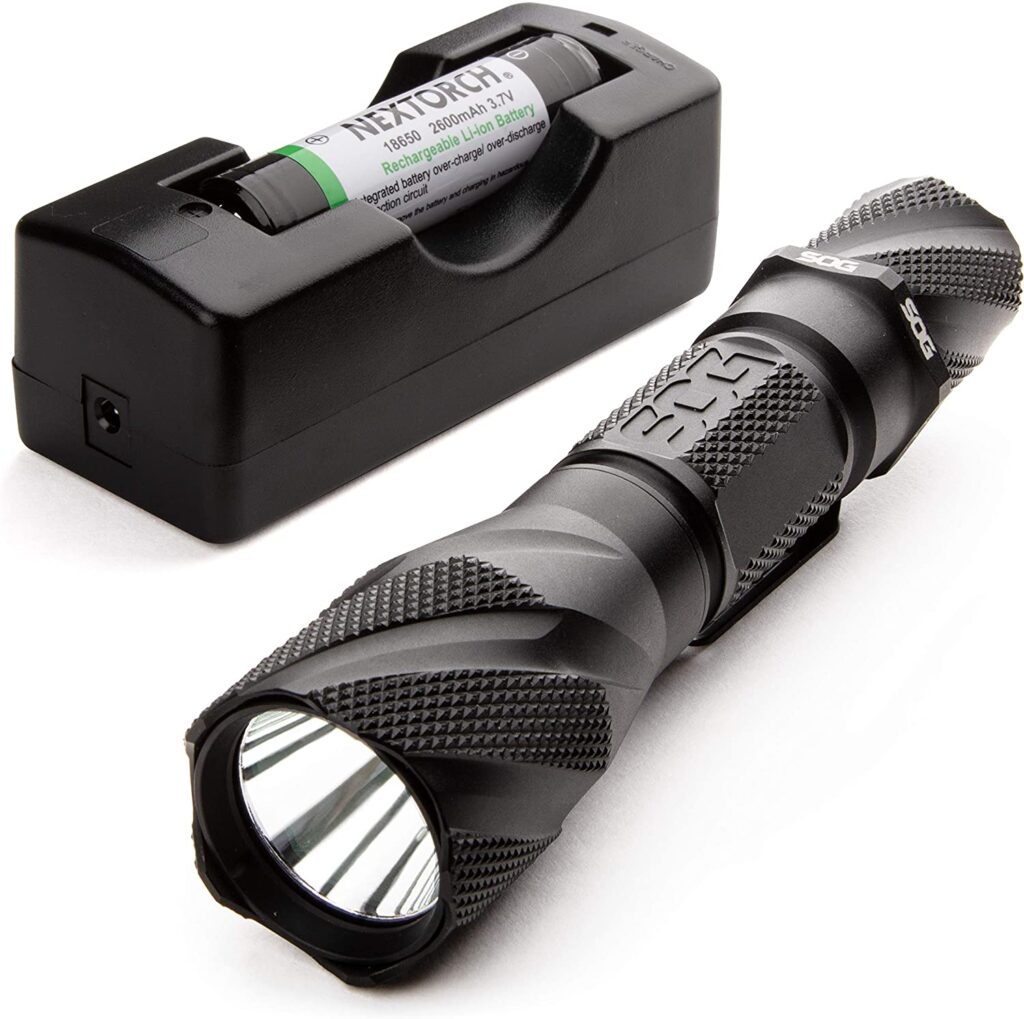 I’m sure almost everyone has heard of SOG. They make dependable products. The Dark Energy line of flashlights are high quality. This particular one emits 687 lumens, which puts it near the top of our list and has 5 modes to give you options; 100%, 40%, reading level, tactical strobe and momentary one settings. It’s 6 inches long and weighs 6.6 ounces which makes it one of the brightest in its class. The battery can run for more than 4 days on the lowest level. It’s waterproof and SOG will consider repairs and replacements for your gear as long as you properly maintain it. 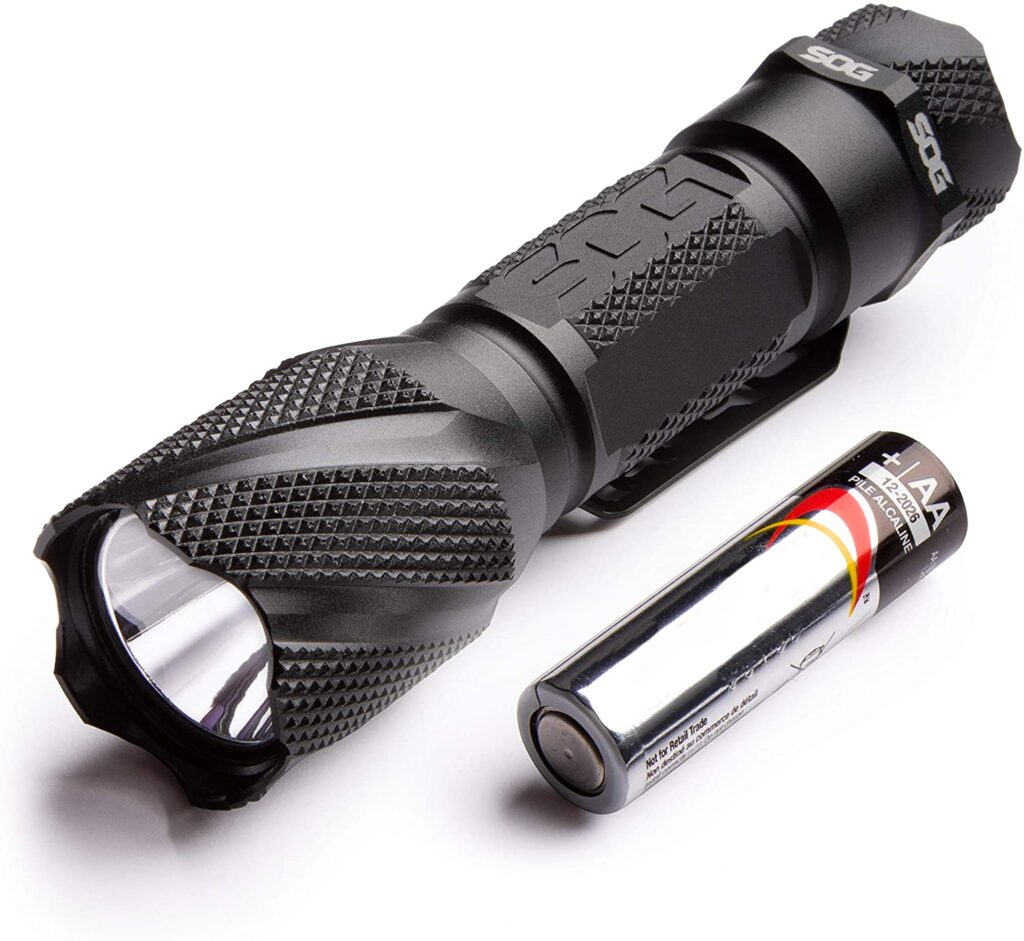 We normally wouldn’t include two items by the same manufacturer back-to-back, but we liked the Dark Energy and wanted to provide a cheaper alternative to the big boy. This one isn’t nearly as powerful, but it’s a good alternative for the cost conscious prepper. 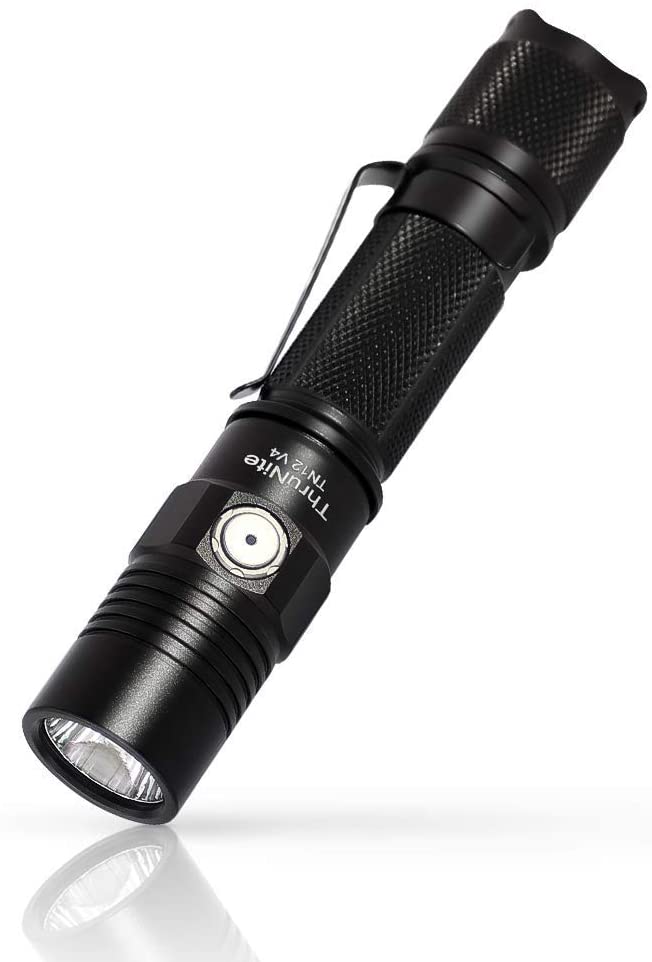 The ThruNite is one of the best tactical flashlights you can buy. This brute put out a max 1100 lumens with one 18659 battery. Small, yet powerful and can fit in your pocket with ease. Great for hiking, camping, law enforcement, military, hunting and any other outdoor activities. Also great for home use. The only thing we didn’t like about this entry is the side switch. I prefer to have the button on the butt of my tactical flashlight, this one is on the side. Not a big issue, but it feels easier to hit the button on the bottom and not the side. This option also comes with various modes to give you more use for this cool little tactical flashlight.

The Best Tactical Flashlights Under $25

These run for around $15 for a package of two. Almost disposable tactical flashlights due to their price. Obviously, they aren’t as high powered as other entries on this tactical flashlight list, but they’re bright and you get two in a package. They will do the trick for hiking, camping and home use. These have 5 modes; 3 brightness levels and 2 security design modes. They can provide spotlight for up to 600 feet and circle floodlight to illuminate a large area. They use either 1×18650 Li-on Rechargeable Battery or you can use 3x AAA batteries. 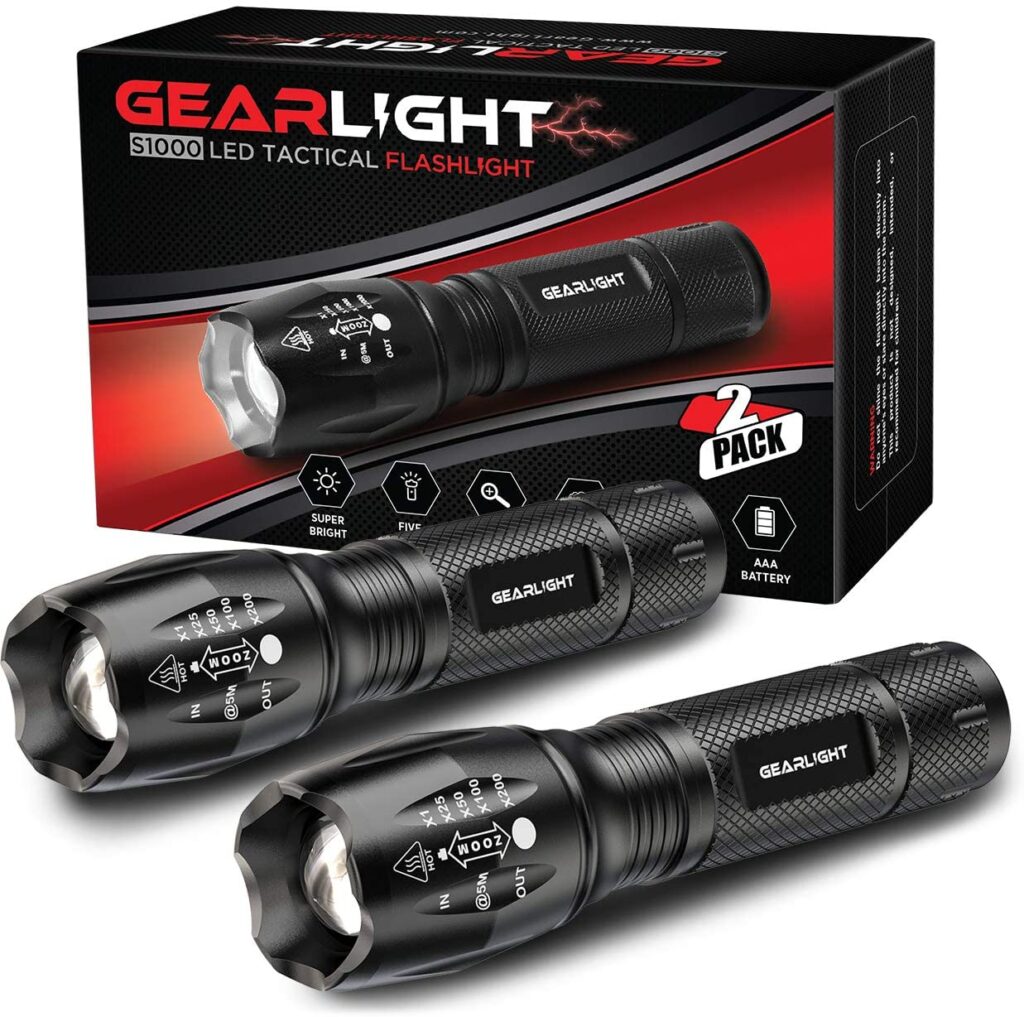 Here’s another 2-pack that can light up your world and not break the bank. These are under $20 for 2. They are zoomable, 5 modes of function, LED light source and just above 5 ounces. Cheap enough to lose on a hiking trail.

This tactical flashlight comes with an adjustable focus for long range viewing up to 600 feet. It takes 1×18650 lithium-ion battery or 3x AAA batteries. Five light modes which include 3 brightness levels and strobe, plus an SOS emergency mode. It has a lifespan of up to 100,000 hours or more and is waterproof. (Don’t put it directly into the water).

We decided to include something a little fun in this list of tactical flashlights; the StreamLight Stylus Pro Penlight. It’s the size of a pen and can fit in your shirt pocket. Corrosion and water resistant designed from machined aircraft-grade aluminum alloy and produces 90 lumens. Tough as nails! The polycarbonate lens is basically unbreakable. It has a rechargeable battery and charges via USB power sources. Really cool add-on item that comes in just over $20! Obviously, you would want to only use this as an additional light, but it’s a highly rated piece of gear that any survivalist would benefit from owning.

What is a Tactical Flashlight?

A tactical flashlight is basically one that’s been designed for tactical uses. They are usually smaller than a regular household flashlight and emit a more powerful light. Tactical flashlights are tougher and made of weapon-grade materials to ensure they won’t fail or break.

Tactical flashlights serve different purposes than basic household flashlights. Many of these were designed for police or military use, but you can purchase them as well. They’re usually smaller in size than regular everyday flashlights that you’d find at Walmart. They also produce more light and are made tougher. Tough enough to be used as a self defense tool. The majority of tactical flashlights on the market are made from weapon-grade aluminum and have a tail switch to turn on and off. This allows you to quickly activate it without fumbling around with switches. This is helpful if you’re facing down a home intruder and will give you the upper hand. A blast of light can blind and confuse an attacker. The high powered beam from a tactical flashlight can take an attacker’s vision away for up to 4 seconds, which is long enough for you to run or fight. It can give you a chance to grab your family and escape a dangerous situation.

Can a Tactical Flashlight be Used as a Weapon?

Yes, you can use a tactical flashlight as a weapon in a dangerous situation. They are usually made from weapon-grade aluminum and can easily inflict damage. The light itself can be used to temporarily stun an aggressor, allowing you time to escape. Tactical flashlights are bright enough to cause temporary blindness in an attacker and can disorient and confuse someone trying to hurt you.

Can You Mount a Tactical Flashlight to A Gun?

Yes, in most cases. Read about the tactical flashlight you intend to purchase to make sure this is possible. Many of them are designed to be attached to a firearm for shooting. They can be extremely beneficial in allowing you to aim a weapon and light up a target at the same time. Tactical flashlights are perfect for low-light target identification.

How Many Lumens Do You Need to Blind an Attacker?

You can momentarily blind an attacker with 150 or more lumens at night or roughly 300 lumens to blind an attacker in the day light. This won’t cause permanent blindness, but will give you enough time to escape or put up a fight.