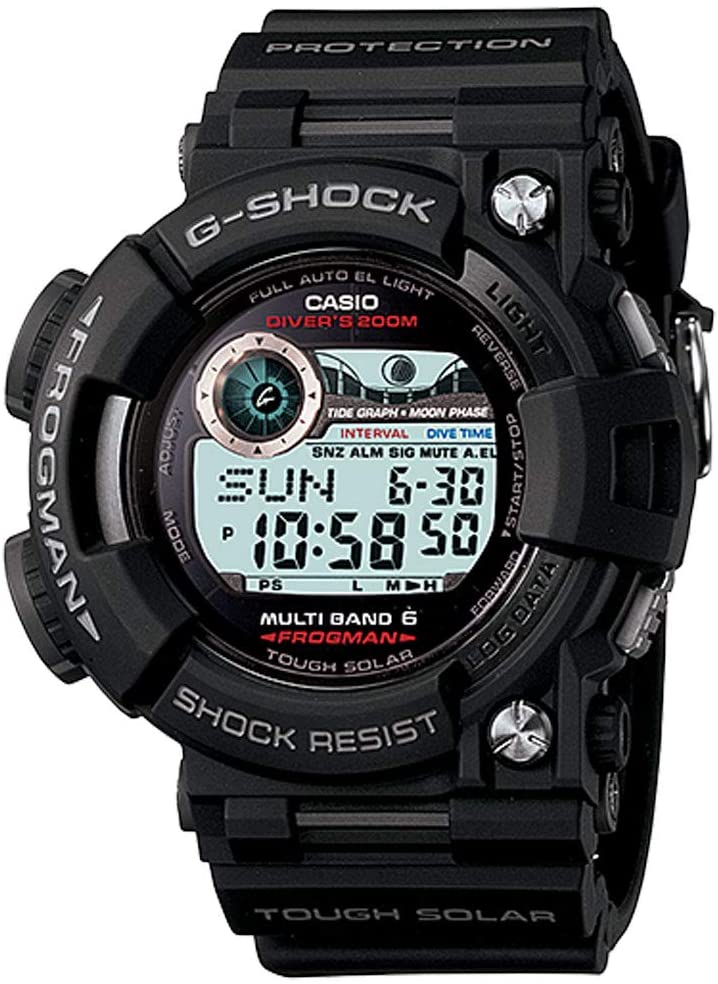 Everyone has heard of the legendary Frogman G-Shock watches by Casio. Any watch that carries the G-Shock name is designed tough, but the Frogman series takes it to a whole other level.

The Frogman GWF1000 G-Shock was designed with top-tier water resistance and solar power capabilities. It’s the G-Shock that does everything. Designed for the rugged outdoorsman, the Frogman series can handle anything life throws at you. -CHECK PRICE ON AMAZON

You won’t have to worry about your watch battery going dead anytime soon. The Tough Solar feature on G-Shocks absorbs energy throughout the day to continually power your watch. In fact, the G-Shock Frogman can absorb enough solar power to extend your watch battery life approximately 8 months on a full charge, even if you don’t expose it to light. Think about it, this watch can power itself for a staggering 8 months without ever seeing the light of day on a full charge. It will absolutely continue ticking with just a tiny amount of solar power. The Tough Solar feature allows your watch to continue operations while charging on its own. 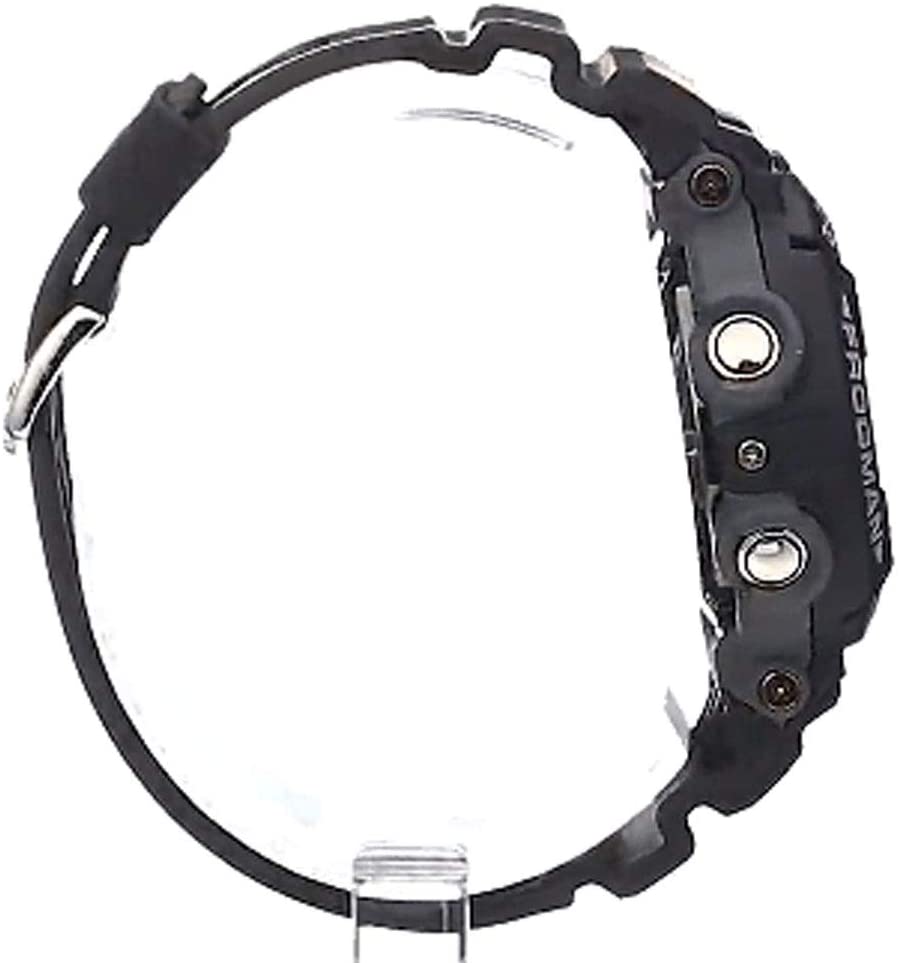 The Casio GWF1000 Frogman G-Shock utilizes atomic timekeeping to ensure it stays on track and always gives you the exact time. The watch receives radio signals to keep accurate time and to stay calibrated. It received time calibration radio signals up to 6 times per day so you know exactly what time it is. This is a great feature to have on a watch if you’re the type of person that expects more from their timepieces.

Every G-Shock is built to last. In fact, the main goal was to create a watch that never breaks. We think Casio has done an excellent job at following through on their primary goal. G-Shocks are designed to resist and overcome impacts and centrifugal forces. They are also able to withstand high water pressure that would damage other watches. You really get a lot of watch for your money when you purchase a G-Shock. The rugged design and materials used in the G-Shock watch construction protects the internal workings from impacts and accidental drops, because let’s face it, you’re going to ding your watch repeatedly throughout the day. The GWF1000 Frogman G-Shock is ISO-level water resistant up to 200 meters and comes equipped with ISO 100M WR dive timer. That‘s quite a long way down and should cover everything you will do in this watch including water-sports, diving and boating.  The G-Shock Frogman watch also has ISO 764 Class magnetic resistance.

The Perfect Watch for Tough Jobs

The Casio GWF1000 Frogman G-Shock is perfect for jobs on the tough end of the spectrum. It’s tough and can take a daily beating with style. They’re some of the most durable watches on the planet and trusted by the U.S. military, police officers, outdoor enthusiasts and other hardcore individuals. The last thing you want to worry about is your watch when out on patrol or a special mission. 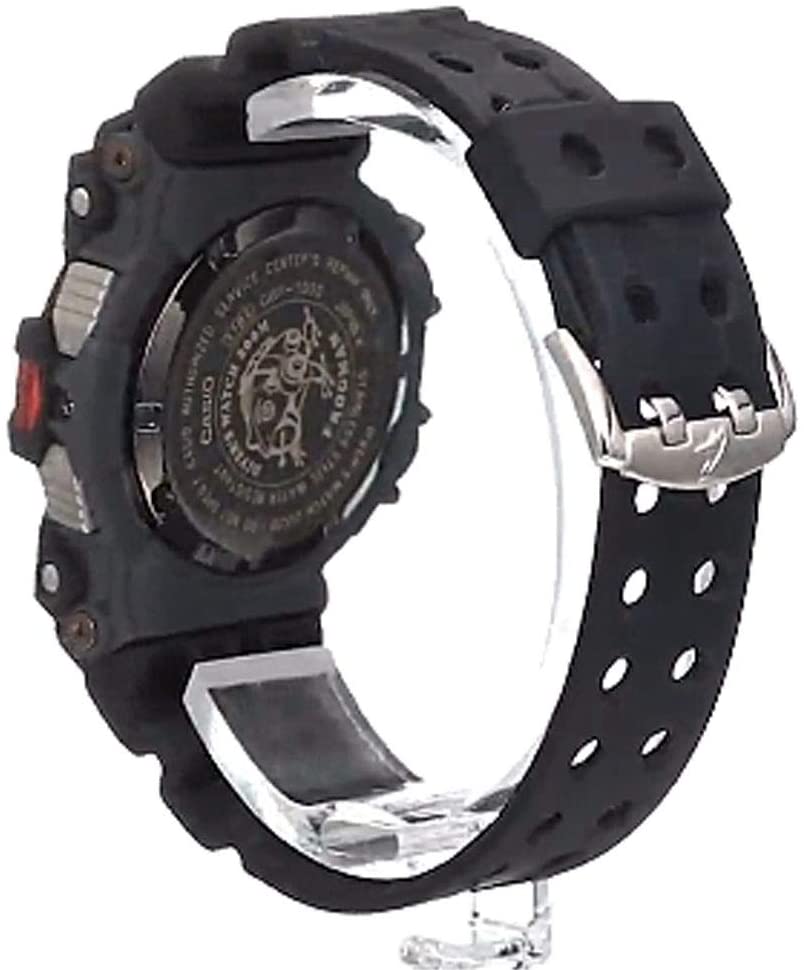 The Rugged Watch with Style

The Frogman series of G-Shock watches outperforms other G-Shocks including the Mudmaster and Rangeman in most categories. The Casio Frogman is one of the toughest watches on the market, but it’s also perfect for the office due to its many essential functions. You can pair a G-Shock Frogman with a business suit to complete your look and show your colleagues you’re the adventurous type.

The Frogman GWF1000 is the type of watch that can take a great deal of abuse, but is still classy enough to shine in the boardroom. It has a tactical feel that appeals to military and police officers, but is still refined enough for the businessman. The Frogman G-Shock has some solid weight and feels indestructible sitting on your wrist. 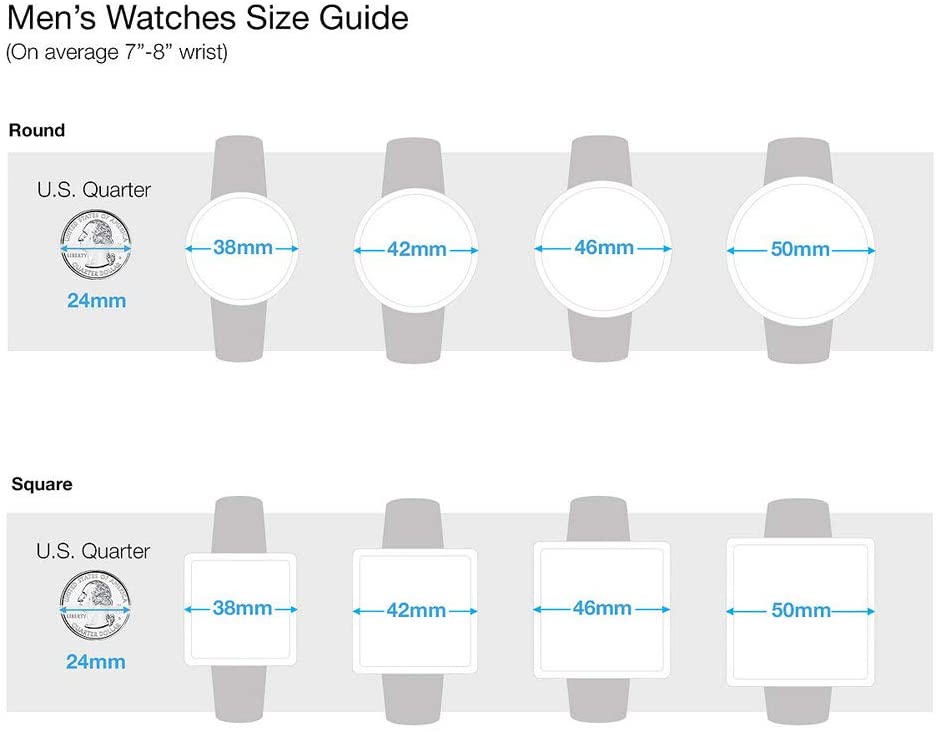 The G-Shock Frogman is loaded with features, such as:

If you’re looking for one of the biggest, toughest and most reliable G-Shocks ever created, the Frogman GWF1000 is exactly what you’re looking for. It’s large, bold and built like a tank. The Tough Solar recharging extends your battery life and the multi-band 6 atomic timekeeping keeps you on schedule with precision timekeeping. The Frogman has special dive functions and is resistant to environmental factors. You won’t have to remove your watch for water sports because the Frogman is water resistant up to 200 meters and its shock and magnetic proof to keep your watch ticking no matter what. While the Casio GWF1000 Frogman G-Shock may be a little pricey, it’s worth every penny for all that you get. This is a highly recommended watch that is perfect for outdoor adventures, office work and anything in between.

Why is the G-Shock Frogman So Expensive?

We all know the G-Shock series of watches are tough, rugged and have tons of features. The Frogman goes a step further than your average G-Shock and fits a certain niche of owners. It’s the only G-Shock in production that meets ISO certifications and is labeled as a Diver’s Watch. You can operate the Casio Frogman G-Shock underwater and use the buttons while diving without issue. Water won’t seep in and you can dive to the stated depth. Frogman G-Shocks are actually tested to go beyond the recommended depth, but you may want to follow the instructions just in case.

The Frogman series of G-Shocks comes fully equipped with compass, depth gauge, horizontal correction, temperature sensor, rugged watch strap and tons of other helpful features to use while diving.

Also, G-Shock collectors grab the Frogman as quickly as they can. Supply and demand make the Frogman G-Shock more expensive beyond the obvious reasons and features they come with. They’re like eye-candy for your wrist and are tough-as-nails. If you have the cash, the Frogman line of watches is definitely something to consider.

How Do You Know a G-Shock Frogman is Real?

You probably already know there are fake G-Shock watches out there. Counterfeit watches are a common problem on many buying platforms. Frogman G-Shocks aren’t cheap and you want to be sure you’re purchasing the real deal. Here’s a few ways you can tell whether or not your G-Shock Frogman is real or fake.

Original G-Shocks are quite heavy and bulky. Most counterfeits will be lighter and will weigh a few grams less than the real deal G-Shock. You will be able to feel the difference in a counterfeit G-Shock if you’ve worn them before.

Check the Back of the Watch

Who Are You Buying From?

It’s best to purchase from a reputable dealer or online store that you can trust to deliver an original G-Shock and not a fake. There are plenty of online G-Shock stores that carry original G-Shocks.

How Much Does the G-Shock Frogman Cost?

The Frogman G-Shock price depends on the exact model and year that you purchase. It’s a good idea to shop around as you may be able to find deals and discounts on a brand new watch. The Frogman has been around for years and you may want to opt for an older model if the new style doesn’t fit your taste. Check out Amazon for the most current prices on your favorite G-Shock Frogman watch as prices are subject to change.